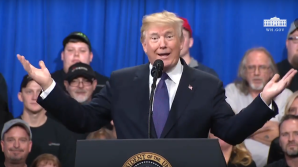 Monday, at a speech in Ohio, President Trump labeled congressional representatives who did not clap for his State of the Union address as un-American and even agreed to call their actions treason.

The US Legal Code Title 18 › Part I › Chapter 115 › § 2381 stipulates that anyone found guilty of treason shall:
– suffer death, or imprisoned not less than five years
– fined not less than $10,000
– be incapable of holding any office under the United States

Regardless of what party you are affiliated with, I beg you to pause and think about these words of President Trump.

“And you have the other side, even on positive news — really positive news, like that — they were like death and un-American. Un-American. Somebody said, “treasonous.” I mean, yeah, I guess, why not? (Laughter.) Can we call that treason? Why not? (Applause.) I mean, they certainly didn’t seem to love our country very much.”

President Trump is using language of criminality to describe those who do not support him and his policies. These are the words of a despot and are not in any way suitable for the mouth of a President of a nation that calls itself a democracy.

The first amendment to the US Constitution identifies that at the center of the rights guaranteed to all Americans is the “right of the people peaceably to assemble, and to petition the Government for a redress of grievances.”

At the State of the Union, many member of congress chose to exercise their right to peaceably petition the President of the United States by not standing and applauding for much of his speech. The moment this right becomes criminalized is the moment our Union is lost.

President Trump’s words cannot be dismissed. Whether he likes it or not, he is the President of the United States and the words coming from the occupant of that office matter. Therefore, this type of dangerous rhetoric must be addressed.