Fireworks are cool, but they never seem to last very long. Most public shows are between 20 and 30 minutes. And the grand finale, when the majority of the fireworks are launched to light up the sky in a blaze of glory that can be seen for miles, usually lasts only a minute or two. Because of this, a good fireworks display can be easily ruined. A faulty fuse, wind, an ill-timed sound track, an inconvenient phone call, even a short thunderstorm can ruin a perfectly good, and expensive, fireworks display. Most of us have probably returned home from at least one Fourth of July celebration somewhat disappointed. (above photo from NBC Washington)

George Erasmus, a wise Aboriginal leader says “Where common memory is lacking, where people do not share in the same past, there can be no real community. Where community is to be formed, common memory must be created.”

Most Americans also don’t know this, but there are 51 gender specific, male pronouns (he, him, his) used throughout the US Constitution and its Amendments in reference to who can run for office, who can serve as President, and even who is a citizen.

Most Americans don’t know this, but the United States never actually abolished slavery. The 13th Amendment reads “Neither slavery nor involuntary servitude, except as a punishment for crime whereof the party shall have been duly convicted, shall exist within the United States, or any place subject to their jurisdiction.”

Every year the Fourth of July becomes harder and harder to celebrate. Not because I despise this country, but because this holiday has become a symbol of our national ignorance. Most Americans (I would estimate over 90%) have no idea that the document they celebrate every Fourth of July refers to the indigenous peoples of this land as “merciless Indian Savages.”  The term bothers me, but the widespread ignorance of our history, and the resulting blind celebrations, outright depresses me.

This holiday has become a vivid reminder that “We the People” never has, nor does it currently mean “All the People.”   And we need to temper our celebrations.

Which is why I am grateful for rain.

Weather forecasters have conditioned us to complain about rain.  Think back to the last time you watched a weather reporter give a forecast for rain before a major holiday or large event. It is almost always negative. I even heard one reporter apologize for forecasting rain. Apologize??? Really?  As if they have any control over it.

The Navajo Reservation is located in the high desert of the Southwest and has an average rainfall below 12 inches per year. But our Navajo people, both today and historically, are dependent upon rain. Corn is sacred to us and is grown by our people, providing pollen for our prayers and ceremonies and food for our families. We have herded sheep ever since they were introduced to us by the Spanish hundreds of years ago and they have become a vital part of our culture, economy and well-being.

But our land has very few lakes and almost no rivers. To this day our people are dependent upon rain. We need it, to sustain ourselves, grow our crops and water our animals.

Because of this, I have worked hard to train myself not to complain about rain. Whenever Creator decides to bless us with rain, I want to be grateful. It doesn’t matter what plans are disrupted or what events need to be changed or even canceled. When you live in the high deserts of the Southwest, rain is ALWAYS needed. It is always a blessing. And to complain about it, whenever it comes, is both short-sighted and incredibly selfish.

Two years ago our family moved to Washington, DC, and at the age of 46 I had to purchase my first umbrella. In DC the average number of days with precipitation is 115. And the annual rainfall is over 40 inches. I was surprised to learn that total is higher than both Seattle, WA (37.13 in) and Portland, OR (35.98 in).  In fact, after spending my first year here, I nearly broke my commitment to not complain about the rain.  Sometime last spring, when the rainfall is the highest and there are between 10-12 days of precipitation every month. I remember praying one day after watching yet another rain storm roll through the area “Creator, I am grateful for the rain, but I think I may have reached my limit. This is too much!”  It was a humbling experience.  Creator had outdone me. I needed to re-check my expectations. I no longer live in the desert, but creator is still in charge of the weather. Creator is the one who chooses when it rains and where it falls. Creator knows what creation needs and I am not in any position to question, or complain about it.

One of the exciting things about living in Washington, DC is all the national and historic events that take place literally in your backyard. Visits from foreign dignitaries, Presidential inaugurations, marches, protests, even marches and protests of Presidential inaugurations. They all happen right here. But one of the largest events that attracts Americans regardless of their political affiliation or who is in office, is the annual fireworks display on the National Mall. This nearly 20-minute display of fireworks exploding over the reflecting pool in front of the Washington Monument is a must see. And every year over 700,000 people flock to Washington DC over the Fourth of July Weekend just to view it in person.

For the past several years, because of my work on the Doctrine of Discovery and American History, Fourth of July celebrations in our family have become more tempered. But we do still try to get out and see the fireworks and we definitely wanted to see them in DC. 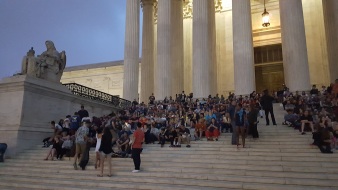 For our first Fourth of July in DC, back in 2016, because of the crowds, we did not want to spend the entire day on the National Mall with thousands of flag waving citizens. But we heard that a good view of the fireworks could be had from the steps of the Supreme Court building, and that was much easier to get to. So late in the evening we walked there. The sky had been cloudy most of the day and it had been raining on and off. When we arrived at the Supreme Court there was already a crowd gathering. So we found a good seat and waited.

The clouds that evening were incredibly low, in fact it was almost like a fog had rolled in. The Supreme Court is located on the far end of the mall just behind the Capitol Building, quite a distance from the Washington Monument. I did not know how high the fireworks would go in the sky and wondered if we had chosen a bad location to watch. Soon we heard booms in the sky and faintly saw the clouds light up, but we could not see any of the fireworks.  We debated if we should walk closer in order to get a better view. But I doubted much could be seen anywhere because of the clouds. So we decided to just go home.

Soon the rain began falling again. And after we got home, we learned that even those close by the fireworks had difficulty seeing them because of the low hanging clouds. One local network even described that year’s show as a “colorful thunder and lighting display.”  And several people they interviewed said they were disappointed.

This year, I felt even more blah as we approached the Fourth of July. The current political environment and the daily partisan attacks, tweets, name calling and resulting stalemate has made living in DC exhausting, frustrating and at times agonizing. The night before the Fourth we took a vote and our family was split, some wanted to see fireworks, but others did not want to bother. This holiday has become a conundrum for us. So on the morning of July 4th I sat down and honestly asked myself, “what is it that I really want.”

Do I want our nation to not celebrate this holiday? Is it my desire that the fireworks stop?  Do I want everyone to be miserable and ashamed on the Fourth of July?

No. That is not my goal. But I long for better relationships. And I want all Americans to recognize the dilemma and conflict this holiday, and our history, causes for Native Americans, African Americans, women and other citizens of color. I want to create a common memory because I desire a healthier community.

I think it is fine, maybe even appropriate for Americans to celebrate our freedom from the colonialism of England but I also want us to lament that our country has its own deep legacy of colonialism, racism and sexism. Much of it against our very own citizens.

I desire for our unabashed celebrations of the white washed history we call American Exceptionalism to be replaced by a deep gratefulness for the growing sense of community that comes from the intentional and difficult work of creating a common memory.

In other words, I want it to rain.

For those who are short sighted and selfish, rain will be a disappointment and they will probably complain quite loudly. But for a growing number of us, who are gaining new and different perspectives on our nation and its history, we will enjoy the disruption to our plans and seek to find another way to make the best of our time together. Because we are learning that healthy community and long lasting, honest relationships are so much better than the fleeting and temporary beauty of fireworks.